The Mother of God in Zarvanyzia 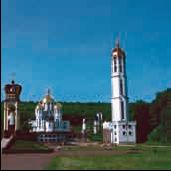 The Sanctuary grew up around devotion to a 13th century icon.The Sanctuary of Greco- Catholic Rite was destroyed in 1944.

Reconstruction began in 1991.The site includes a museum of the persecution.The place is well frequented by Orthodox Christians.

The Theme for 2006 is “The Faith of the Young People”. Many pilgrims arrive on foot. Pope John-Paul II visited Kiev in June 2001, the Icon was brought to him.

The Feast of the Sanctuary is sunday after the feast of saint Paul and Pierre, 12 july.