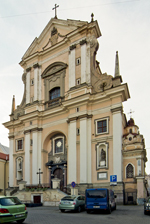 The church architecture was designed according to the Il Gesu church example (the baroque shrine without towers), widely used in the first half of the seventeenth century in Rome, and it is similar to Lublin (Poland), Lvov, Krakow and other early churches that belonged to monasteries. The church was probably designed according to one of the two example patterns.

The church of St Theresa significantly differs from the Il Gesu church in Rome. It does not have a plan of the Latin cross, but is rectangular in its shape with a low closed cupola. These special characteristics were typical of the Carmelite churches in Rome: S. Maria della Scala and S. Maria della Vittoria. The interior space is divided into three naves (side naves have a number of sequent chapels). The main nave is surrounded by eight stone vaults which are higher in their size than the side ones.

The church’s façade is characterised by monumental features, strict linear plastic, slightly prolonged proportions. Three-stage façade stands on a very high pedestal. The portal and a window above it have been integrated into the arch-shaped niche. The portal is crowned with a coat of arms of the Vasa dynasty carved on the white marble, representing grain sheaves. In the pediment one can see the coat of arms of the supporter of the construction of the church, under-chancellor of the Grand Duchy of Lithuania Stephan Pac, on which a double armorial lily is featured. The sloped volute plastic is highlighted by two contrasting obelisks.

Luxurious and elegantly combined material was used for the façade décor: grey Swedish sandstone combined with black and white marble. Such a luxury was very rare in the buildings of the Discalced Carmelites. That’s why the church of St Theresa in Vilnius is distinguished by its splendour and beauty. In its architecture, the Carmelite model is intermingled with an exceptional touch of the Roman architect and ‘the style with the black marble’ which shows the taste of the famous sponsor who was from the royal environment.