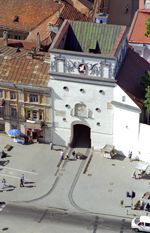 The Chapel of Our Lady was built in the 16th c., in the place of the defensive tower at Aušros Vartai. Before the chapel was built in 1671, the icon of Our Lady of the Gates of Dawn was placed a little way in the wall in the spot where it still hangs with windows and doors in the form of a rough square to protect the painting from snow and rain. There was a very small shelter in front of this door, into which straight and narrow steps led just broad enough to allow pious visitors to approach and light a candle if they wished to make an offering. According to the European Catholic tradition, there was a custom to hang pictures of the Virgin Mary within city gates.

As a counterpart to the painting of Our Lady, the depiction of the Saviour of the World hung on the outside of the gates. Later it was kept in the Monastery of the Discalced Carmelites, before being transferred to hang i 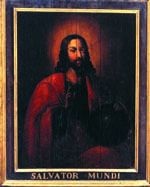 n Vilnius Cathedral. The painting was seized by Soviet authorities and handed over to the Lithuanian Art Museum, where it is still found today.