One side of the cupola vaulting shows the death of St Theresa. The composition is based on the carving of A. van Westerhout. On the upper side of it, there is a fresco of St Theresa lying with a cross; sisters are holding her from both sides while brothers and parents are watching. Beneath her, on the clouds which are painted on the entire vaulting, the figure of Christ is painted on the left, stretching his hand to the Saint. A crowd of heavenly figures dressed in bright colours are painted on the other side. Holy Spirit Dove is also seen in the ray of light between St Theresa and Christ. 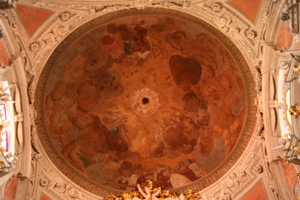 Another side of the cupola shows apotheosis of St Theresa: supported by angels, the Saint is soaring into the clouds. This part of the composition is also based on the carving by A. van Westerhout representing the life of St Theresa. There is an inscription underneath, saying: ‘St Theresa whose thoughts were constantly raised to heavens was taken to heaven in soul and flesh, because she merited being with those who art in heaven’.