The tradition of devotion to Our Lady 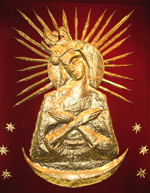 In the seventeenth-eighteenth centuries, Sweden and Russian armies ravaged the city of Vilnius in succession. The Lithuanian capital was also devastated by numerous fires. Thus, after these occurrences, the Gothic appearance of the city disappeared for Vilnius to become ‘baroque pearl’. The city dwellers believed that the Protection of Our Lady of Aušros Vartai saved their town from the entire destruction: the Virgin Mary extinguished fires and, like the Ark of the Covenant she treated her foes without mercy.

People had recourse to Our Lady of the Gates of Dawn not only in times of fires and wars. After the Third Partition of the Polish-Lithuanian Commonwealth in 1795, the largest part of Lithuania, including Vilnius, and later the entire country, was annexed by Russia. Three Uprisings in 1794, 1831, and 1863, failed to liberate either Poland or Lithuania, but these events did reveal irresistible urge of the two nations to win back their freedom. Devotion t

o Our Lady of the Gates of Dawn grew alongside with persecutions. The shrine became not only a worship place, but also the place for political demonstrations, gathering here members of student secret societies – the Filarety and Filomaty. Important cultural figures of Vilnius, who wrote in Polish, of the nineteenth century, such as Józef Ignacy Krashewski, Juliusz Słowacki, and Wladisław Syrokomle (a.k.a. Liudwik Kondratowicz) and who had played an important role in the Lithuanian culture and revival, also contributed to the propagation of devotion of Our Lady. The famous composer from Vilnius, Stanisław Moniuszko wrote four solemn litanies for choir and orchestra especially for this shrine.

Gradually, Aušros Vartai became the symbol of Polish and Lithuanian struggle for freedom and statehood. After World War I, when the Vilnius region was incorporated into Poland, the paths of the two nations diverged. Our Lady of the Gates of Dawn came to be called the ‘protectress of Poland’s eastern border’, but fearing further discord between Lithuanians and Poles, Pope Pius XI did not support the idea to give the title of the ‘Queen of Poland’ to this image.

During the period of mass deportations and emigration of Poles and Lithuanians, the shrine of the Gates of Dawn acquired a new meaning – it became a symbol of the lost motherland, whereas devotion to Our lady – as a symbol of national identity and grounds for hope. Dispersed all over the world due to war, political oppressions and poverty, Lithuanians and the Polish speaking population of the Vilnius district, leaned on the Virgin Mary of the Gates of Dawn, choosing her as the patroness of their societies, asking the Mother of God for help in refugee camps and in Siberian exile. They also established churches devoted to the Mother of Mercy of the Gates of Dawn whenever they could. Parishes of the Lady of the Gates of Dawn (Aušros Vartų) got established in New York (US), and Montreal (Canada). Poles who after World War II were forced to leave the Vilnius District to Poland, also built churches dedicated to Our Lady of Aušros Vartai not only abroad, but also at home, and one of such churches stands in Warsaw today. Sometimes they even built copies of the building of the gates, as is the case of the Radom Diocese, where in 1989, such a building was constructed in a small town of the diocese.  In 1970, in the cellars of St Peter’s Basilica in the Vatican, a Lithuanian chapel was consecrated. It has a mosaic altar, consecrated by Pope Paul VI, holding the icon of the Mother of Mercy of the Gates of Dawn.

The religious persecution which started after the Soviet occupation in Lithuania did not decrease devotion to Our Lady of the faithful. In 1948, a secret Lithuanian catholic self-education society, the College of the Virgin Mary of the Gates of Dawn (Aušros Vartų Mergelės Marijos kolegija) was founded in Vilnius. It was liquidated by Soviet security forces in 1950. After 1973, members of the illegal Catholic youth organisation the ‘friends of the Eucharist’ (Eucharistijos bičiuliai) started organising pilgrimage trips to the chapel. The youth from the parish of Vilnius used to gather to recite rosary in turns in front of the image of Our Lady. On November 16, 1979 the Catholic Committee for the Defence of believers’ Rights celebrated its first anniversary here.  Members of the committee were congratulated by young people from all over the country.

After Lithuania regained its political independence and complete religious freedom in 1990, the Gates of Dawn became a point of attraction for those seeking a more private devotion. However, today it is still a place of spiritual succour in a chaotic world dominated by consumer ideologies and values. Pilgrims who flow in from neighbouring countries find the Gates of Dawn open to all those who seek the protection of the Mother of God.