The Black Madonna of Einsiedeln 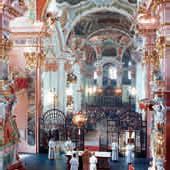 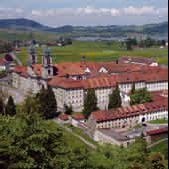 The history of Einsiedeln begins with Saint Meinrad, a hermit and martyr of the 9th century. The statue of Our Lady is a black Madonna, dating from the 15th century, clothed in precious garments.

Einsiedeln is a well-known Benedictine abbey and an important stop on the pilgrimage to St. James of Compostela. The patronal feast of the sanctuary takes place on August 15. Since 1547, the monks of Einsiedeln have sung the Salve Regina in the Lady Chapel daily after Vespers at 4:50 p.m. From June 14 to 16, 1984, Pope John Paul II visited this Marian Shrine as a pilgrim.