Queen of Peace and of the World 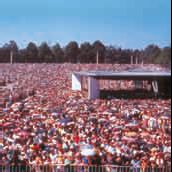 The Sanctuary began with the three Apparitions of an Angel in 1916 and six Apparitions of the Blessed Virgin Mary on 13th day of each month from 13th May to 13th October 1917. The visionaries, Jacintha, Francesco and Lucia were between 7 and 10 years old at the time. Lucy died in 2005. Our Lady appeared as the Queen of the Rosary, where her Immaculate Heart is crowned by thorns and on fire. Our Lady asked for people to say the Rosary, to do penance and pray for the conversion of Russia.

On 13th May 1946, Pope Pius XII declared Our Lady of Fatima as “Queen of Peace and of the World” Pope John-Paul II visited Fatima for the first time on 13th May 1982, one year after the assassination attempt on his life in St. Peter’s Square. He returned on other occasions. The Feast of the Sanctuary is kept on 13th May.