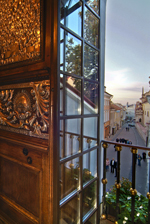 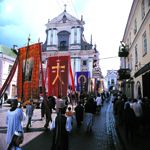 The first special celebrations in honour of Our Lady of the Gates of Dawn were held on May 18, 1706 after the Great Fire of Vilnius. Many residents of Vilnius claimed to have experienced Our Lady’s help at that time and some of them even claimed to have seen how the Blessed Virgin rose above the church of St Theresa and the chapel to extinguish the flames. From that day on May 18, orchestras from all over the city used to gather on their own will at Aušros Vartai, and used to play beautiful music pieces to the Blessed Virgin Mary each year. This tradition faded in 1715 when the wooden chapel burnt down.

As Palm Sunday approaches, traditionally traders gather here to sell Palm Sunday wands or verbos, thus, creating a unique and colourful picture of the street. The palms are thus, blessed and carried in a solemn procession on the same Sunday.

According to Vilnius tradition, the Corpus Christi (Body of Christ) procession ends at the Gates of Dawn. The procession was forbidden during the soviet occupation in Lithuania, but it was again revived after Lithuania’s independence was regained.

Over the entire second half of 20th c., the Mass is celebrated and the Litany of Loreto to the Blessed Virgin Mary is sung both, in the Lithuanian and Polish languages up to these days. The parish is also being taken care of by both communities in agreement.