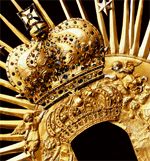 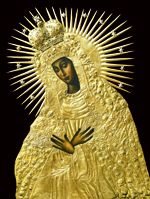 The painting of Our Lady was hung originally without the silver and gold fittings it bears today. Decorating holy paintings with precious metal clothing and crowns is an old Lithuanian and Polish tradition which may be borrowed from the Orthodox practise. It is considered that the Aušros Vartai Madonna started to be covered with silver-gilt mountings in 1670.

The casing is comprised of three layers made by different artists at different times. The first metal band is made of three plates made in 1670-1690, covering the head and shoulders of Our Lady. The second band comprised of five plates and covering the icon’s breast, dates back to 1695-1700. This band is different form the higher band. Its relief is higher and the flowers and leaves are treated in a dryer, sharper fashion. The third band covers the entire bottom of the painting and it dates back to not later than the first third of the 18th c. While studying the reverse side of the casing in 1993, it was established that the first and third bands were made especially for this painting, while the central one was taken from another piece and was only adapted to it.

The plates are decorated with floral motives. Specialists can distinguish at least ten various types of flowers on it. The floral richness in Mary’s surroundings is no accident. They show the maiden ‘without spot or sin’ as the hortus conclusus, or enclosed garden, mentioned in the Song of Songs (4, 12). This is an ancient motif that was popular in the Middle Ages.

Our Lady is crowned with a double crown. The lower crown made of moulded copper gilt and covered with gold, dates to ca 1700. The upper crown is silver gilt, covered with gold and decorated with colour glass inlays from ca. 1750. On July 5, 1927, the icon was crowned with new crowns blessed by Pope Pius XI. These were exact copies of the old crowns made from gold offered by people for that purpose. Our Lady of Aušros Vartai was given the title of Mother of Mercy. The fate of the crowns blessed by the Pope is not known: probably, with the start of World War II, they were hidden somewhere and their whereabouts were later forgotten.

The large crescent moon votive offering beneath Our Lady is beautifully incorporated into the whole of the picture’s form and meaning. Its origin is only known from a mysterious inscription in the Polish language: ‘Thank You, Mother of God, for hearing my prayer; Mother of Mercy, keep me in your most holy grace and protection, I pray for you. WJJ 1849′.