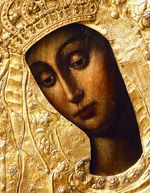 The Aušros Vartai image is rich in its meaning. We can see the young maid listening to the angel’s message; there is the Mother of Mercy, holding the sinful people in her heart’s embrace; the sun, stars and the crescent moon are the attributes of the Immaculate Conception and represent the flow of Divine graces. The picture, rich in symbolic meanings, remind us of the Tota pulchra image-type of Our Lady (which comes from the reference to the Song of Songs, 4, 7: ‘Thou art all beauteous, my beloved, and in thee there is no spot’). The Blessed Virgin Mary is presented here as the beginning of the new creation justified by Divine Grace alone and as the highest ideal along with her Son for all Christians.

The depictions of Our Lady’s parents – St Joachim and St Anne – are also related to the Immaculate Conception. Their sculptures stand at both sides of the painting between the altar columns. According to a belief, Virgin Mary’s parents were wealthy pious people, who for a long time were childless and felt much shame because of this. Once St Joachim was even driven out of a sacrifice rite in a synagogue and thus, he was so disappointed that he did not want to go home. However, an angel came and told him to go to this wife, and soon after that they had a daughter whose life was accompanied by various miracles from the very childhood. The wonderful story of Mary’s birth is considered as evidence to her exceptional status: from the very moment of her conception, God embraced her with the special divine care and grace and preserved her from the stain of original sin. Through the Immaculate Conception, Mary was justified with regard to the future Incarnation and Redemption of the Son of God, and thus, her birth prophesise the coming salvation – just as the morning star foretells the rising sun.