Aušros Vartai | Interior of the Chapel

Interior of the Chapel 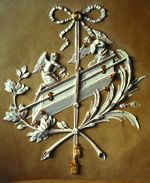 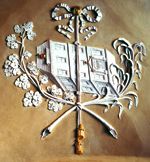 The altar in the centre of which stands the miraculous painting of the Mother of Mercy, is built in the Cclassical style with Corinthian columns. On both sides of the painting, in-between the columns there are sculptures of Virgin Mary’s parents: St Joachim and St Anne. The altar is crowned by the Glory Name of Mary in Glory. This Name came to be honoured widely throughout the Catholic Church with its own special feast, after the famous victory of Grand Duke of Lithuania, the King of Poland Jan III Sobieski against the Turks at Vienna in 1683 that saved Christian Europe from further Ottoman invasion.

The ceiling vaults are decorated with a thin plaster relief which was created at the same time as the altar. They depict a star and two more Marian symbols taken from the popular Litany of Loreto. On the left (as we face the altar) is the Ark of the Covenant, the Old Testament symbol of God’s covenant with His people, The Ark of the Covenant is crowned with laurel and palm branches. The laurel symbolises eternity, while the palm represents forbearance and martyrdom. Both plants are signs of victory. On the right there is the House of Gold, the Home of Divine Wisdom, crowned with a vine branch and a reed. The vine is the image of life in Christ, while the reed represents the faithful who live on the water of God’s Grace.

Part of the lower walls is covered in art deco frieze in pressed metal made in 1932 in Vilnius. The frieze contains stylised lily branches whose buds contain medals with reliefs which give visual form to the appeals of the Loretan Litany, around the medallions. This delicate frieze provides a visual echo of the prayers recited daily here by pilgrims. The silver covering for the frieze was made from silver votive offerings donated to the chapel over the years. The chapel walls are also covered in ex voto offerings.