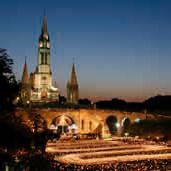 The Sanctuary grew from the eighteen apparitions of the Blessed Virgin Mary to Bernadette Soubirous between 11th February and 16th July 1858. On 25th March, the “Lady“ gave her name: “I am the Immaculate Conception“. The dogma was proclaimed by Pope Pius IX on 8th December 1854.

The Apparitions were recognised as authentic in 1862.

The Feast of the Sanctuary is kept on 11th February.