«The Great Mother of Austria» 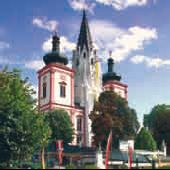 The Sanctuary grew up around a monk named Magnus who was sent by his abbot to the local population. The monk brought with him a statue of the Blessed Virgin Mary. On his way a rock barred his path. Magnus put down the statue and built a cell for it and for himself.

Mariazell was the main Marian Sanctuary of the Austrian-Hungarian Empire.

The Feast of the Sanctuary is kept on 8th September.