Aušros Vartai | Painting and its origins

Painting and its origins

There are various opinions as to the origins of the Aušros Vartai Madonna. According to some of them, the icon is very old, an 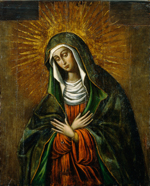 d is a Byzantine orthodox icon which was brought to Lithuania by Grand Duke Algirdas in 1363. In the nineteenth century, this legend gave grounds for the Russian authorities to take the painting away from Catholics. Finally, fearing for the reaction, the Russians gave up the idea to take away the painting. According to the latest research, the painting was created around 1620-1630, on the basis of a picture by the Dutch artist Martin de Vos, dating to the second half of the 16th century, which had been based on an engraving of Thomas de Leu (1580).

The icon (200x162x2 cm) is painted on eight oak boards. The paint was applied on a very thin layer of chalk priming, as is typical of northern European painting traditions. The way the picture is painted gives grounds for thinking it was created in Vilnius.