The Church of St Theresa 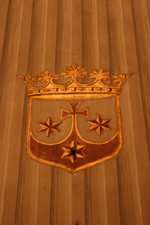 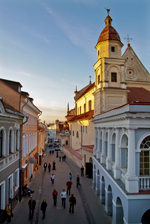 Built by the Discalced Carmelites in 1633-1654, today the Church of St Theresa of Avila is closely linked with the chapel of the Gates of Dawn. The church has been incorporated into the large and spacious monastery and its few inner yards.

The Discalced Carmelites is the Order reformed by St Theresa of Avila and St John of the Cross in Spain, the members of which obey the strict monastic ‘rule’ of St Albert and their proper Constitution. These monks were the most known in the field of mystic theology and the writings of St Theresa and St John of the Cross have been considered informative masterpieces on mysticism up to these days. In 1626, the Discalced Carmelites came to Vilnius and in 1737 they established the Lithuanian province of St Casimir. After the uprisings of 1831 and 1864, the tsarist authorities closed all the monasteries that belonged to the Discalced Carmelite Order. Later, in pre-war Lithuania, the monasteries were restored again.

Sponsored by Lithuanian noblemen, the Discalced Carmelites built a monastery complex in Vilnius, bordering the fortification walls of the city, which stretched over the territory of three districts. In 1654, the church of St Theresa was consecrated by bishop of Vilnius Jurgis Tiškevičius in the place where it stands today in front of the monastery buildings surrounded by the brick wall, with its presbytery bordering the monastery.

Under-chancellor of the Grand Duchy of Lithuania Stephan Pac sponsored the construction of the church. Its exterior was designed by royal Italian architects Constante Tencalla and Giovanni Battista Gisleni. The present day interior was created in the second half of the eighteenth century. In 1760-1764, the artist from Vilnius Motiejus Sluščianskis decorated the church’s interior with the frescoes representing the life and activities of St Theresa. In 1783, Motiejus Pac built a chapel (in-between the rococo and classicism style) on the side of Aušros vartų street.

The church of St Theresa has never been closed down. In 1844, with the closure of the monastery of the Discalced Carmelites, the church together with the chapel of the Gates of Dawn became a parish church