The complex of the big and side altars of the chancel 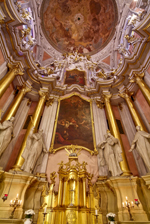 The complex was built in 1763-1765 during the interior restoration work after a fire. The architect of the altars, who moulded statues and décor elements, is not known. However, from the favourite motive of broken and cambered cornices, one can think this is the late baroque school architectonic plastic of J. K. Glaubičius. Four statues of saints stand between three columns near the altar: St Albert with a cross in his hand; he was one of the founders of the Carmelite order; Prophet Elias who is the spiritual guide of the Carmelites and is related to the first eremites who lived on the Mount Zion; there is also mystic Dominique of St Jesus Mary, holding a burning heart and a representative of the old Carmelite rule, St Angel with a palm branch. The central part of the altar is decorated with the painting by Simonas Čechavičius, representing the piercing of the heart of St Theresa.

Some details of the altar are unique for this baroque church and are not found in other baroque churches in Vilnius. The altar’s composition is crowned with a glorifying motive supported by cornices, in the centre of which there is a heart surrounded by angel heads and clouds. There are also angels stretching their hands towards the nineteenth century painting by Kanut Ruseck, depicting the Virgin Mary with the baby Jesus and St Casimir. It was not by accident that St Casimir appeared in the central altar of St Theresa’s church, because in 1734, the patron Saint of Lithuania, St Casimir, became the patron saint of the province of the Discalced Carmelites in Lithuania.

The great St Theresa altar is beautifully incorporated into the entire altar complex, in the sides of which there are altars of St Virgin Mary and St Joseph. On the left side, there is a valuable painting of the Blessed Virgin Mary, most probably painted in the eighteenth century. On the left altar, which bears the title of the Blessed Virgin Mary, there are sculptures of St Theresa of Avila and St Joseph, and on the right side of it there are figures of the King David and an allegoric figure of Silence, or else called Chastity.