Aušros Vartai | The Gates of Dawn

The Gates of Dawn 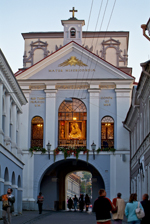 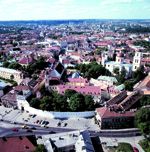 Due to frequent attacks on the Lithuanian lands from the Tatars and regular conflicts with the Grand Duchy of Moscow, in 1503 Grand Duke Alexander of Lithuania granted the city of Vilnius a privilege to build fortifications of brick and stone around the entire city. The story says that the foundation stone was laid in the place where the road sets out to Medininkai and beyond deep into the Grand Duchy’s Russian lands via Oshmiany towards Minsk. After the stone was consecrated, the work began on building the gates which would later be known as the Gates of Dawn. No one knows when the construction work of the brick and stone walls was finished, but by 1522 the whole city was already ‘girt in stone’.

The Gates, in which the Chapel consecrated for the painting of Our Lady of Mercy is today, was for the first time mentioned in a charter in 1514 as the Medininkai Gates. The name Porta Acialis (lot.), Ostra brama (pl.), which means ‘Sharp Gates’, appears in the documents for the first time in 1594. It is not known, yet, why the gates were called this. Lithuanians living in the surroundings of Vilnius used to call them Ašmens vartai (‘Blade gates’). Some people reckon that this is a Latin and Polish calque made by non-Lithuanian speakers from ‘Ašmenos vartai’, or Blade Gates (lat. acies – blades) has been literarily translated into the Latin and Polish languages. Likewise no one knows when or why the gates gained the epithet of ‘Aušros’ (Dawn). It could be that the name came from the association of the gates with the worship of Our Lady, as the Morning Star (‘Aušros žvaigždė 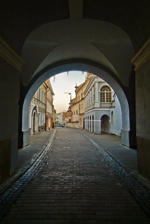 The Chapel was not the first home of the painting of Our Lady of Mercy. At first, Our Lady’s image was hung on the inside of the gateway in a small niche as a counterpart to the depiction of ‘the Saviour of the World’. Both images were in the city’s possession. The painting did not have either a suitable chapel or any adornments that are typical of wonder-working images. This was until the Discalced Carmelites arrived in Vilnius in 1626. The monks were given a piece of land to build a church and a convent near the Gates of Dawn.

It took a long time to build the church which was consecrated only in 1654. The church was dedicated to the great Spanish mystic, spiritual teacher and reformer of the Carmelite Order, St Theresa of Avila. Since the Carmelites established in Vilnius, the painting of Our Lady which hang on the city gates then, constantly attracted the monks’ attention. The Carmelites used to hold services at the painting in order to encourage devotion among the citizenry. In 1668, the city’s authorities entrusted the monks with the care of Our Lady’s painting and in 1671, thanks to the efforts of Fr Charles of the Holy Spirit, a wooden chapel was built to house the image. During the construction work, the painting was kept in St Theresa’s church and later it was solemnly transferred to the chapel.

In 1702, when Swedes occupied Vilnius, it was forbidden to worship the icon publicly and to gather in the street. During the liberation fight of the gates, the icon of Our Lady was damaged by a shot. After the wooden chapel burnt in 1711, a brick shrine was built in 1712-1715, which has survived up to these days. In 1829, the chapel took on the style of the late Classicism. The chapel was built so that the faithful could pray in front of it in the street, because the entrance to the chapel was from the monastery’s garden, and lay people, especially women, were not allowed to enter there. During the reconstruction work in 1828-1829, the side windows were enlarged to reach the floor level. In 1785, the Lithuanian Supreme Tribunal prohibited any kind of trade in the street during services in the Gates of Dawn. Irrespective of their faith, passers-by were requested to walk bare-headed from the Gates of Dawn to the Pociej Chapel.

In 1844, the Carmelites were driven out of the monastery for having provided succour to rebels, and the monastery was given to Russian Orthodox believers, whereas the chapel was handed in to the Catholic diocesan clergy. Since then, the access to the chapel has been open to everyone. Just before that, a gallery with inside stairs had been built in 1789-1799 for pilgrims according to a project by Pietro di Rossi. Now this is a classical two-storied building with a closed upper gallery and an open lower gallery. At first, the arcade of the upper gallery was open. During the reconstruction work in 1830, the former wooden balustrades were replaced with stone parapets and the arches were glazed in, whereas the inside stairs of the gallery were rebuilt. Today, there is an organ on the upper floor of the gallery (it previously stood on both sides of the altar), and the gallery itself was joined onto the chapel.

In 2002, the entire building was carefully repaired and during the repair work, some fragments of the hidden décor dating back to the 19th century, were uncovered.