Aušros Vartai | The Tower of the Gates of Dawn

The Tower of the Gates of Dawn

This is a large oblong structure with five apertures from which weapons could be fired. The front arch had double gates, one of which could be raised and the other closed in the normal fashion. The brick wall of the tower is constructed in the Gothic style and is between 2-2,6 m thick, with the decorative attic (the upper part of the building) constructed in the Renaissance style.

The gate’s attic storey is crafted in the Northern Renaissance style. It was probably added to the top of the gate tower at the beginning of the 17th century, perhaps when the gates were rebuilt in the wake of the Fire of 1610. The composition on the façade represents the Vytis, or Knight, grand-ducal heraldic charge supported by two mythological creatures: griffins. The origins of the griffins which support the Grand Duchy’s coat of arms are an enigma. In the Christian symbolic meaning, the image of a being that rules both, heaven and earth is played by Jesus Christ, Pantokrator (ruler of the universe). Therefore, it is probably no accident that the griffins stand above the niche bearing an image of Christ, Saviour of the World. Here, Our Lord bears the globe in his hand. Hidden beneath the attic storey cornice is a head of Hermes (Mercury). 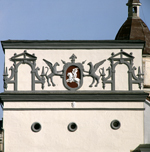 Saviour of the World. In the seventeenth century, a picture of the same subject painted on boards was most probably replaced by this fresco.  To Our Lord’s right stands St Casimir and on His left, is most likely a painting of St Stanislas, the co-patron of Vilnius Cathedral.