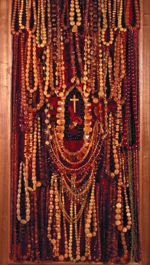 Votive offerings are signs of gratitude of the faithful. They testimony about the favours received from the Mother of Mercy. The form of many of these is very simple – small hearts, figurines of people at prayer, images of cured eyes, hands and legs. The first known votive offering was given in 1671. That was a plaque depicting the miraculous restoration of a dead child to life. This offering was destroyed by one of the many fires in Vilnius. However, there ought to have been even earlier signs of gratitude, since it is clear from the story of the miracles that the parents of the deceased boy were not doing anything particularly new by approaching Our Lady of Aušros Vartai for help.

At the end of the eighteenth century, there were already so many votive offerings that the Discalced Carmelites were able to allocate 51 ex voto offerings hanging on the altar for making gold and silver frontal (the plate decorating the front part of the altar) for the Chapel

altar in 1799. In 1808, 37 ex voto silver offerings were used to make a pax 9a cross for the faithful to kiss during the Liturgy of the Eucharist) for the chapel. In 1810, as many as 100 ‘old’ (i.e., most probably from the 18th century) offerings were melted down for liturgical vessels.

The number of offering was increasing all the time. They came to find their place not only next to the painting, but also all over the altar. The description of the chapel dating to 1844 says that ‘there are 306 offerings of various shapes and hallmarks attached to a copper plate near the four columns of the altar… there are 406 different offerings pinned to the altar

Today the chapel contains symbolic gifts, most of which given by pilgrim groups from abroad. These are not so much evidence of the graces received, but rather an expression of respect and devotion to Our Lady. Undoubtedly, many of these donors gave out of reverence to Our Lady, and not because they have experienced various miracles in their lives which they attribute to the Mother of Mercy (such as, recovery from a serious illness, rescue from danger or a difficult situation in life). No less important was the spiritual help and consolation which people found at the icon of the Aušros Vartai Madonna, such as help in inner battles, the conversion of the nearest or dearest, or the gift of wisdom in troublesome choices…